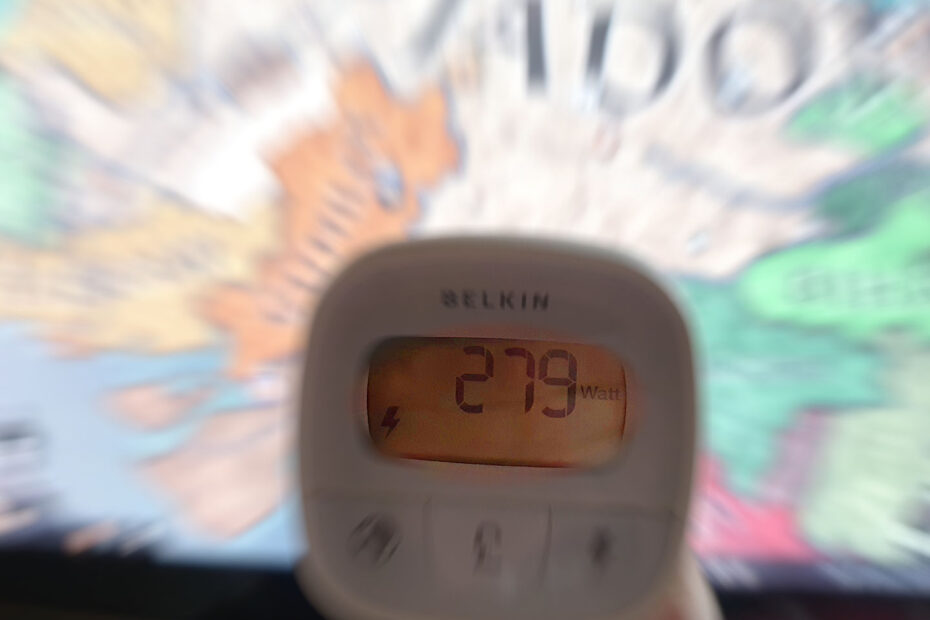 We’ve been putting together an HTPC using a Dell Wyse 3040 thin client PC. We’re using Arch Linux as an OS, and installed media applications Kodi and Chromium (to give us Netflix). We also installed Openbox to provide a window manager, and set up control of applications via remote using FLIRC. Now I’d like extend my viewing options with an extra display.

The Wyse 3040 is pretty small as computers go, about the size of a hand. It’s bigger than a Roku stick or a single-board computer like a Raspberry Pi or an Odroid, but still small. Thankfully on the back along with power, network and USB it packs in two DisplayPort outputs.

I’ve been using one output with a cheap active DisplayPort-HDMI adapter, which goes to the old Samsung 50″ plasma TV via an Onkyo audio receiver (HDMI in → audio out via speakers + video out via HDMI). The problem is that plasma TVs are incredibly power-hungry.

I measured it, and got between ~250 and 325 W! That’s… not fun given energy bills have shot up (ca. 47p per kWh at time of writing). I don’t want to buy a whole new TV when i got this one for free when someone was disposing of it, but nor do I particularly want to fall asleep with the thing on all night! Extra-unfortunately it doesn’t standby when losing signal (a big deficit for a plasma TV- keeping that “No Signal” on the screen must be horrid for burn-in), nor does it have a sleep timer/mode.

Enter this tiny 15″ monitor! Drawing a respectable 9W, if I did fall asleep with this on it would still consume less power than an hour of watching the plasma TV. Even better, it does sleep when it loses signal, so I can configure Kodi to disable the display output when idle and the monitor will drop to standby for even more power savings. I tested an old 15″ Dell monitor too, and it also draws 9W. I knew keeping those around for years would pay off!

Having hooked the 15″ monitor via an active DisplayPort-VGA adapter (I can’t remember what I bought it for, but it came in handy!) I can see that Kodi runs just fine on a small resolution†.

Unfortunately, using Kodi’s own menu didn’t actually change the display; just made it display the 1280×720 TV-sized output on the monitor itself. D’oh. I was able to get this working via xrandr:

From there I created one liner executable scripts with these incantations, and hey presto! I can change resolution from the command line (remembering to prefix with DISPLAY=:0), which is nice, if a little inconvenient.

Unfortunately, something in here caused Kodi to forget how to display text after playing a video or going into screen-dim mode.

It turns out this was a known issue, which was subsequently fixed in a merged PR. This being an HTPC — motto: “get it working then don’t dare touch it” — it hadn’t been updated in quite a while (er, 2020) and was still running Kodi 18.8.

Arch needed to be updated, and good practice is to:

Unfortunately I hit a couple of stumbling blocks:

For some reason, the mirror I had a the top of my mirrorlist (/etc/pacman.d/mirrorlist), UK Fast, was distressingly out-of-date. Using Mirrorservice sorted that and got archlinux-keyring 20220424-1 installed nicely.

That’s a problem. The Wyse3040 I have has a comparatively tiny amount of storage. I went through the filesystem with ncdu and removed a few bits of low-hanging fruit, but it was clear deleting a few things here and there wasn’t going to butter the parsnips.

Instead I remote-mounted the package cache (/var/cache/pacman/pkg) on my desktop PC. If that sounds horribly janky to you… you’d be right. But it worked!

Side note: no chance it would have succeeded on the Wyse-

Now that we have a script that can switch between the monitor and a TV, it’s time to make it work more conveniently than ssh-ing in from a phone. Yup, it’s FLIRC time again!

My preference is to map this on to the audio receiver’s remote. I think this works better than the TV remote for a couple of reasons:

First, set up (add) the keyboard shortcuts in (to) ~/.config/openbox/rc.xml: