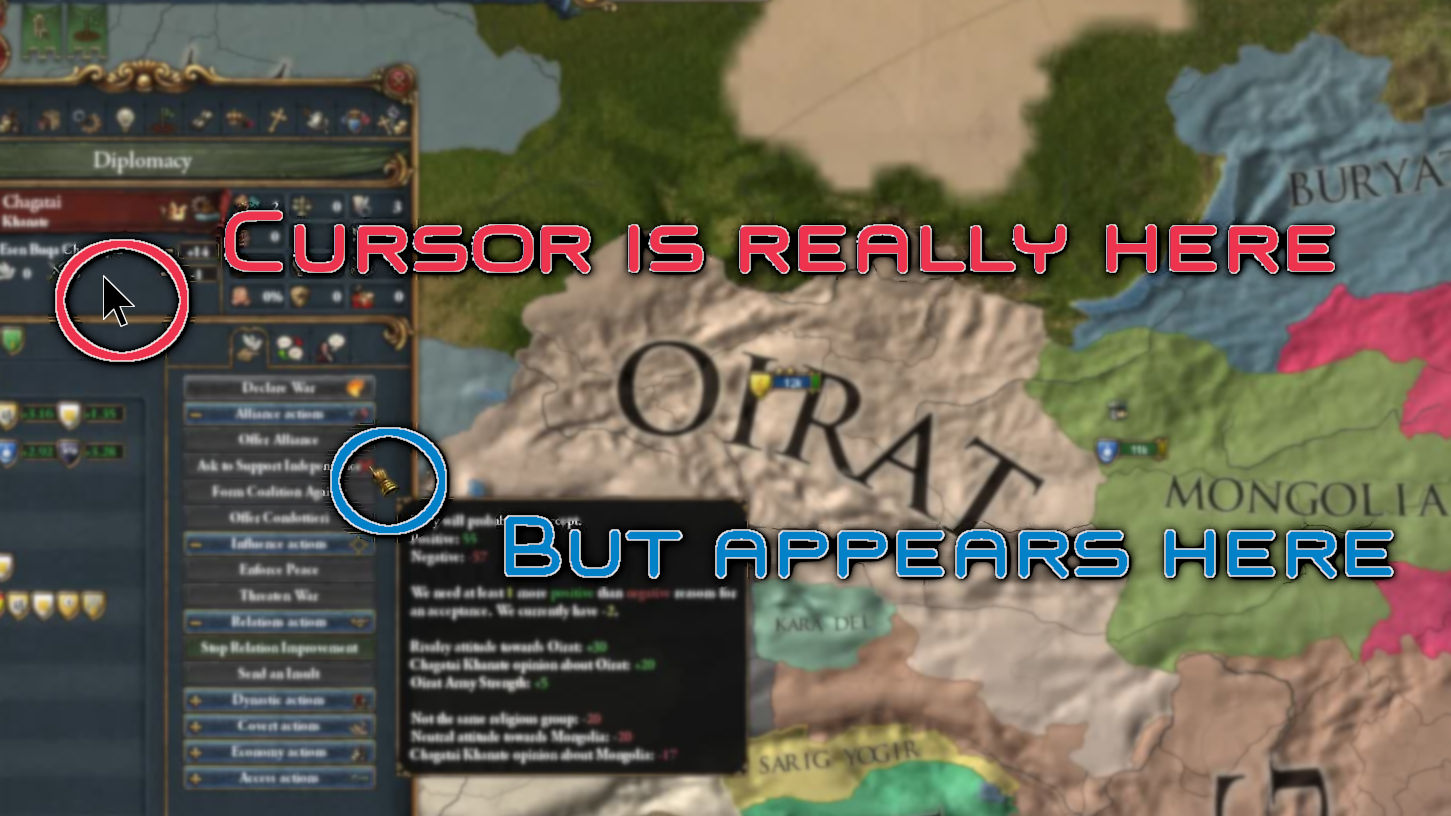 Capture, scaling and output, oh my!

OBS, the excellent media recording/streaming software has a slightly annoying behaviour for me. The cursor in the output is not shown at the same place as in the input- it’s offset., further down and further right than it should be. This gets worse the further away from the top-left corner the cursor is in-game.

A picture should make it more obvious, see examples.

It’s quite annoying because the dissonance of where someone is actually clicking versus what people watching the video (live or on playback) see is jarring, so I’ve been disabling the cursor. But that’s not optimal either, as the in-game cursor is the closes thing the player gets to an avatar / representation. You can see how someone thinks and plays by watching their cursor!

and compare that to when we move the cursor a little down and a lot right:

Not good! In fact, the cursor can disappear completely from the output if it gets far enough down and/or right.

I’m 99% sure this arises as a result of Windows Scaling / DPI manipulation. I set Windows to scale apps on my main monitor, so that my potato eyes can see what is going on better.

There’s a side benefit to this- I run games in the same resolution as my OBS canvas, 1920×1080; this means there’s no scaling needed. That’s also my output resolution for videos, so scaling is skipped along the pipeline there. Thinking about it a little more I wonder if that’s actually the case for a scaled game/window; but that’s speculation for another time.

So the cursor ends up a multiple of 1.75 (or 7/4) away from where it should be. In the top left the coordinate values are low so the offset looks less bad, but moving down and right it looks worse as the gap appears larger, then by a little over half-way the cursor disappears entirely!

(it should be quite quick to mock up an example in python to show this, that’s a job for future-me)

Yes past-me, it was relatively quick and fun!

That pretty much matches up to the observed behaviour in game.

A problem has been identified, and it should be possible to fix relatively easily. Anyone who is in this situation has a couple of options:

I’m not the only person to have this problem. I think it’s worth solving for others. Let’s look at cursor-capture.c:

As an aside, it’s really heartening to see a codebase where:

I don’t speak C++ very well, but it seems that the final (x,y) position where the cursor is drawn is modified by two things: an *_offset, and a *_hotspot. It’s possible that the OBS devs, smart folks that they are, have already considered scaling. That’s something that can be explored at leisure, git grep is oftentimes helpful in this case.

In the meantime a proof-of-concept fix can be applied, quick-and-dirty style:

Told you it was quick and dirty! However, by multiplying by 4/7 we should negate the 175% scaling throwing off the position.

If the quick-and-dirty fix works, we have a starting place to work from to propose a patch. Off the top of my head:

But before that I need to figure out how to compile OBS for Windows. That might be a separate project in and of itself… stay tuned!