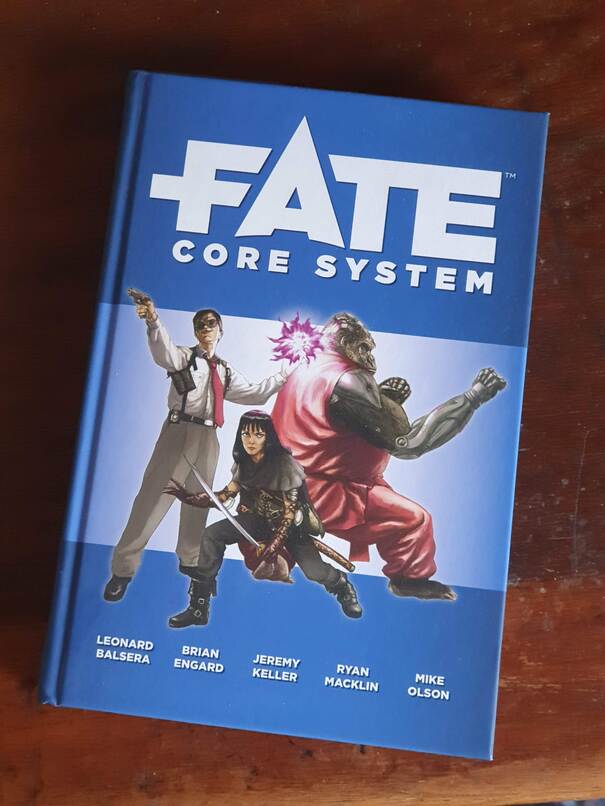 Muddling through, one aspect at a time…

I had read about Fate before and done some preliminary exploring of the system. I like concept of shared storytelling via the interweaving of player characters, and having players invested in worldbuilding as well.

With the coronavirus lockdown makes playing Fate simultaneously easier and more difficult. People generally have more time, and familiarity with teleconferencing is now the norm; but playing RPGs online loses some of the immediacy of in-person play.

So trying out Fate is one of my goals. There are a bunch of resources on the practicalities of playing Fate online which may be of use for others who want to do the same thing.

The Fate Roleplaying Game SRD (system reference document) is available online. The book I have is for Fate Core, but since all of us who will be playing it are quite new we will probably use Fate Accelerated rules.

It also has a page specifically put together for playing Fate online, based on a community request Reddit post.

That page was put together by Randy Oest, who has his own page on managing a Fate RPG campaign online. Many of the tips there are worth borrowing, and borrow them I will!

There is also a PDF of how to play Fate online posted on Twitter by @PG_YYZ in March. Some of it goes into setting up Discord and finding/collecting players on Reddit, but the rest revolves mainly around Roll20, which I’ve mentioned here previously.

Speaking of Roll20, Nathan Hare has a useful guide on his blog about playing Fate on Roll20 (with associated image album) from 2017. It goes into detail about layouts, tokens and macros; and between that and the PDF you should have a good idea of how to get a really good looking, slick setup on Roll20.

As an aside, while there’s plenty of customisation that can be done, but I’ll be sticking with a somewhat bare-bones approach for the first session at least. None of us know if we’ll be continuing the campaign, or using the first session or three to get familiar with Fate before starting afresh.

There’s another Reddit post from a couple of years ago with a few suggestions, such as keeping things simple with Google Slides/Writer/Draw.

Having not yet tried Fate online, I obviou8ly cannot say what works best. That being said, my plan is roughly:

I’ll document how I set up the last two, and revisit this once I have a setup I like.