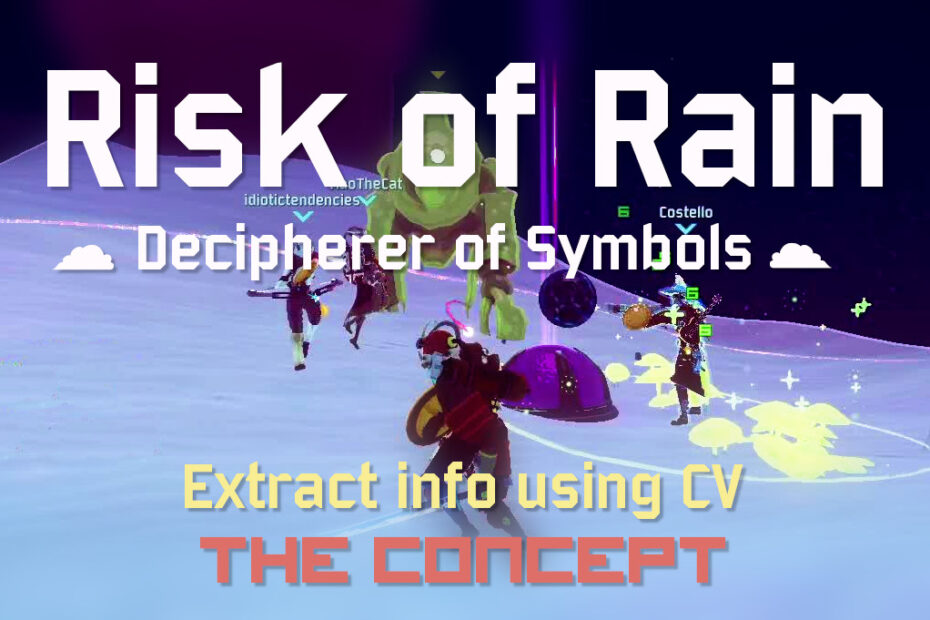 I love Risk of Rain (RoR), and it’s sequel Risk of Rain 2 (RoR2) even more. They fit all the pieces together so well, I could go on for ages. I have also in the past used computer vision (CV) / optical character recognition (OCR) to extract info about videos of Deep Rock Galactic for posting on YouTube . It occurred to me that I could do something similar with RoR2.

Let’s take a random frame from a recent video:

There’s a lot going on in the screen, let’s see what useful info there is.

Who’s Playing and Who They Are Playing

Ignoring the allies (the drones), we can see that the left-hand list has the other players in text (and so OCR-able), and their character as a pictograph.

In the top-right, there is difficulty which is useful for describing the run overall, and a couple of different progress indicators- stage and time. Neither of these are entirely reliable- going to the Bazaar Between Time pauses the timer, and going to the Void Fields does not advance the stage counter displayed thankfully does advance the stage counter displayed. As a side note, this has gameplay effects, such as Void Reavers being able to spawn earlier than usual.

The player abilities set / loadout is in the lower right. This lets us make a decent guess as to who is being played, but it can be misleading in a couple of circumstances:

Other info in the first image above includes: money and lunar coins, items, currently difficulty progression, player level and HP. None are terribly interesting except perhaps the items for any notable items- legendaries, boss items, lunar items.

The image doesn’t show one that that is useful though: if artifacts are active for the run, they show up on the top right as pictograms.

So we know the player info isn’t terribly reliable; is there anywhere else we can get that info? Yes! We can take inspiration from what we did with DRG, which was to use the starting and/or ending screens!

Perfect- the selected character is written in big clear letters in the left hand third of the screen.

The end screen has even more info:

Which we may use later.

The information in the images above is more than enough to be useful for purposes such as creating video info and metadata for YouTube, and perhaps other things like the automatic collection of run stats.

Before we get ahead of ourselves, we have to be happy that we can indeed extract the information that we need, so we’re going to get some frames and do OCR on them, and perhaps a bit of CV glyph-matching.

previousUsing Zoho for WordPress emails? Use an App Specific Password