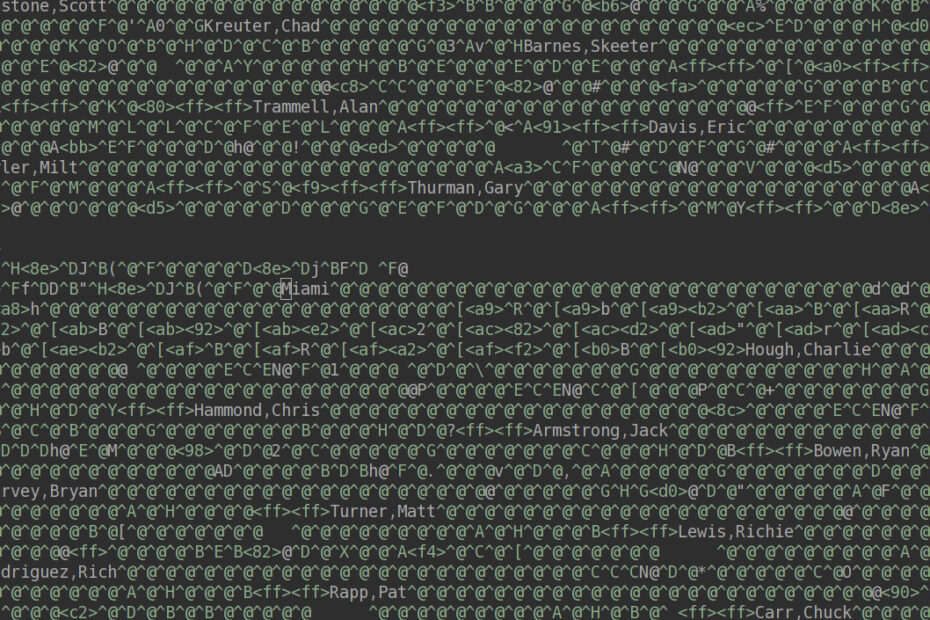 Do it not the easy way, and not the hard way, but some other way

During a Subscriber Crown, I assign teams (usually) to subscribers. To do this, I wrote a team picker in python which highlights a bunch of teams and then ‘picks’ one:

That python program takes as one of its inputs a plain-text list of teams, one team per line. For old genesis games (NHL 94, Fifa International Soccer, etc) those team lists are usually somewhere, like the game’s Wikipedia page or a retro gaming wiki. Simple enough to copy and paste. But in doing the entry for MLBPA Baseball, I couldn’t easily find a list, so I had to get it myself.

There are twenty-something teams in the game so the dumb-but-infallible method of loading up the ROM (which means booting up a VM) and manually copying the teams felt a bit, well, friction-y.

I’m a big fan of pushing oneself to learn features and new ways of doing things. It’s easy to pour scorn on someone who, say, works on a spreadsheet and manually adds up values in a column to get a total. But if that person comes from a background of ledgers or other paper spreadsheets and no-one told them that digital spreadsheets have formulae that can be used, much less ‘you can use SUM() for that’, well, it’s not their fault!

I could quite easily open up the ROM in a hex editor, and manually eyeball the teams. In fact, that’s what I did at first.

Then I thought “don’t be so silly”, there’s a learning opportunity here. Vim can work as a hex editor, so maybe I could use that and use it to jump by a fixed byte offset to each team, copying each one to a file! Except, er, I don’t know how to jump byte-wise in a file opened by xxd / a vim buffer run through xxd. I asked in #vim but I think there was a slight bit of talking at cross-purposes: I was learning-oriented whereas the person trying to help me was goal-oriented. No problem, just not quite a meeting of the minds; I having done it myself, I do appreciate those who help others for free.

To be honest, strings gets me most of what I need from the file:

Looking at it, there’s an obvious section with the team name, team abbreviation and player roster. A couple of approaches come to mind: I could use regex with start+end markers to pull out only the section with teams; or I could select lines which are all caps (team abbreviation), and pull out the previous line (team name).

The first approach seems the most straightforward:

via this SO answer.

From there it’s trivial to remove the bits we don’t want: player names, by filtering out lines with a comma (grep -v ,), and filtering out uppercase letters (grep -e "[^[:upper:] ]"):

I’d like to investigate more, and see if there’s an elegant way to do it in pure awk, but this is the output I need.

In my view it’s important to explore what tools can do, and I think little tasks like this are a useful way of gently pushing boundaries. It helps that it is a real task, so that you actually have to complete it; as compared to synthetic learning ‘follow along’ learning exercises for which the temptation to abandon them can be significant!

I perhaps jumped into #vim a little hastily. I have a natural tendency to over-research before asking questions; I’d rather ‘waste’ my own time trying to find an answer than other folks’. I am trying to find the middle ground sweet spot there.