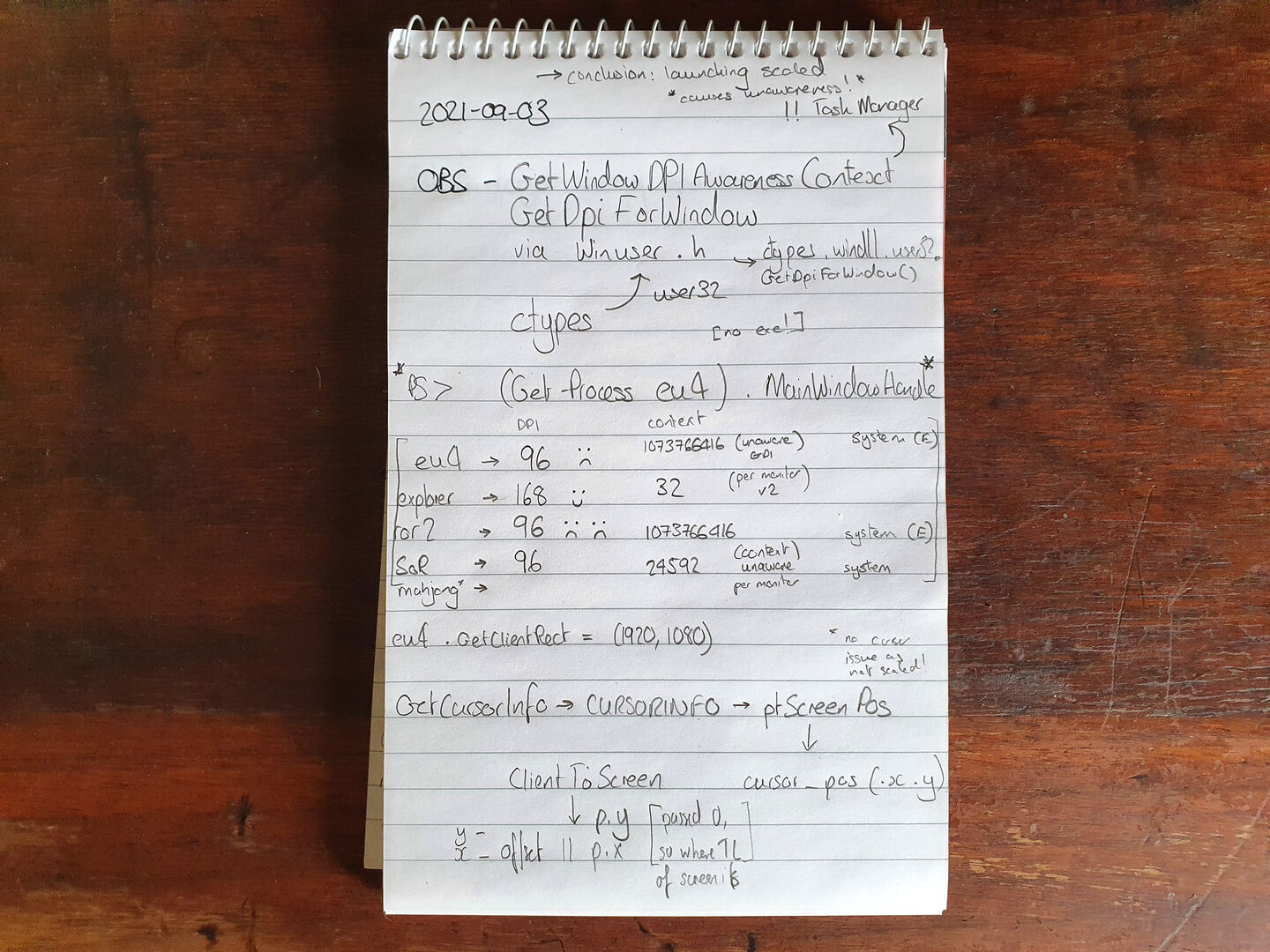 Poking and prodding at the Windows API

There is an issue with cursors being rendered offset for DPI-scaled windows in OBS, illustrated in this video clip:

I’ve been looking into this as it was suggested that my proposed fix of letting the user specify an offset amount was more of a workaround of the underlying issue. It’s a bit like a coffee machine, apparently.

To make a useful and comprehensive fix I wanted to do a bit more research, as there are a few points outstanding.

Why are some games unaffected?

The last question I posed previously as a stinger was: why are some games’ cursors unaffected by the scaling issue?

The answer seems straightforward from what I can tell: they render their own cursor. They presumably do this and hide the Windows cursor (ie unset the CURSOR_SHOWING flag). When OBS comes to render the cursor, it notes that flag and skips rendering it.

Can we use DPI-query APIs to get the window’s scale?

Determining a window’s scale factor programmatically was mooted to obviate the need for the user to manually set a scaling factor, which would be potentially confusing UX for users who have the issue, and unnecessary for those who don’t.

Windows provides a GetDpiForWindow function to do just this. While obs-studio already has the interface to the API defined, it’s a bit slower to work from C++ to poke around at Windows API functions. So I used the native python ctypes library to poke at it from a a python REPL. More on that elsewhere!

Unfortunately for scaled games I was still getting a DPI value of 96 for any game I cared to test. I checked Windows explorer, which did return a DPI value of 168 as expected (96 * 175% scaling).

So they were being reported as DPI unaware. That’s a bit odd, particularly for relatively modern games. made well after Windows introduced DPI awareness settings (they changed a little after Windows 8, but they were there!).

I double-checked with Task Manager, which can show ‘DPI awareness’ (in the ‘Details’ tab) for processes. That confirmed what I saw. I checked Mahjong Nagomi, and saw that actually did have DPI awareness. Oho! It turns out that I never actually scaled that game, and was simply running in 2550×1440.

So it would seem that by turning on scaling, the process/window becomes DPI-unaware. As a consequence of this, any query of the window’s DPI will return 96:

DPI unaware. This process does not scale for DPI changes and is always assumed to have a scale factor of 100% (96 DPI). It will be automatically scaled by the system on any other DPI setting.

See also: Windows lies about DPI over on Stack Overflow.

This seem counter-intuitive, but as over at MSDN:

Since we’re forcing Windows to do scaling on a DPI-aware application, we’re basically taking that DPI-awareness, chucking it away and saying “do a simple bitmap scale on this instead”.

Where does the OBS cursor bug occur?

While poking around the Windows APIs and the OBS code, I got to wondering where the actual issue is. The relevant workflow for the cursor seems to be: