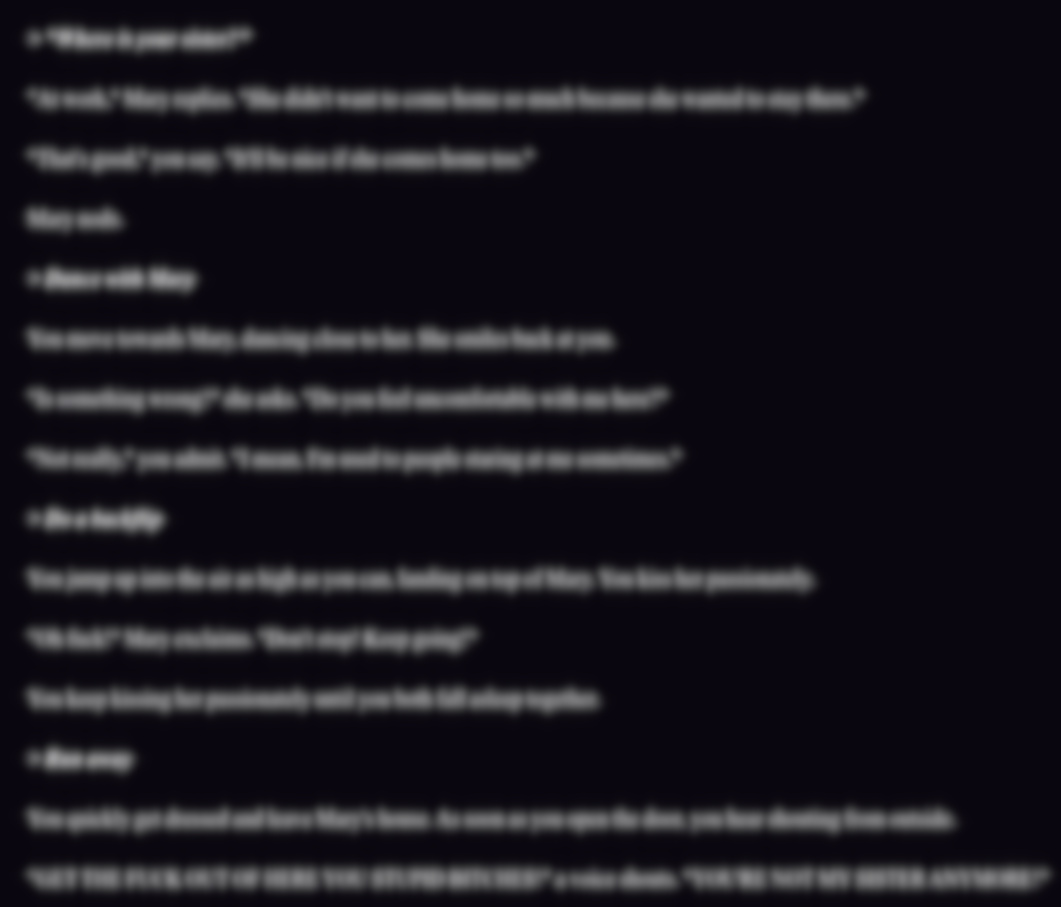 Apparently, there’s something about Mary

It’s night. I’m a private detective from Chicago named Joseph, on the hunt for someone named Jim, and I have a gun and a badge. I’m in the woods, and I hear some noise from behind the trees. Suddenly an old man shoots an arrow from a bow at a hitherto-unseen target. He runs off, but I catch up with him and ask his name. It turns out that he’s also a detective from Chicago named John, and he’s also hot on the trail of Jim too.

I ask “How did you know my name?” and he replies, succinctly: “Because we’re both detectives.” I try to discuss the case with him, but he refuses to be drawn on it, preferring to cryptically state “I’m sure we’ll have some clues soon enough”.

We come across a small house in the woods, and I venture inside. A woman sits, reading quietly. I ask her about Jim, but she only says that he left long ago. I make a note of the house and return the next day without John. I look around and find some white socks and black pants. Ah-ha! These are crucial to the case. I put them on immediately. Surely it’s now only a matter of time before I find Jim.

I go back outside, and see John, the other detective watching me cautiously. Clearly he’s jealous of my new socks and pants. He disappears into the woods. I run after him but find only a shack, in which a single light bulb illuminates a strange assortment of books and papers with diagrams. I picture Jim with this:

Combing through the strange lot of papers, I find one that might help my case! It’s a drawing. A drawing of a man in front of a tree. He has a hat, and the hat has horns. His eyes are wide open and staring at me.

I find the tree in the drawing. It’s odd. It isn’t right. It seems to be made of wood, but it has cracks all over and seems as if it was never alive in the first place. Maybe it has Jim inside it? In any case it isn’t right. It has to go.

I break the tree apart, fling a piece at a nearby wall, which thuds, then silence.

The next day, I come home and see that everything is gone.

The above is how my first dabble with AI Dungeon 2 started. I was linked to it without context, so had no preconceptions going in. it all started off somewhat normally, I wondered if it was some kind of randomly-generated MUD (a old text-based system predating popular MMORPGs that let users create text-based worlds and interact with one another. But as things got slowly more odd it seemed like it was something else. It had the slightly weird, funny cadence that computer-generated text has.

I had come close to finding Jim. The house, the pants, the drawing in the shack, and the tree. They all fitted together, and I knew I must be close. I returned to the woods.

Thereupon I chanced on a woman sitting on a rock, crying. She explained that her sister Mary had gone missing only the night before. Perhaps Jim had a hand in this. I tried to explain the situation as best I could, but this only upset her more. So instead, I gave her a hug. This calmed her down, perhaps too much. She fell to the ground. She needed to be somewhere safe, but where? Ah! The shack! I carry her there.

Going in, I find a man dressed in an old coat and wearing glasses. He has long white hair that hangs down to his shoulders. His eyes are closed and he seems very tired looking. What the heck is he doing there? I demand to know his name.

“My name is James, but everyone calls me Jack.” Joseph, John, Jim, James, Jack… Wait! James? As in the unshortened form of Jim..? I have to think on my feet, and decide to act quickly.

I’ve got him now. Or so I think. But the man just sighs and shakes his head. He thinks he’s won. But I’m Joseph, a detective from Chicago. And Chicago detectives know how to roll with the punches, literally and figuratively. I decide to roll with this one and throw him off balance. I drop my voice, lean in close and growl:

He yawns and rubs his eyes. He looks tired too. But he knows I’ve got him. “Mary… Jim… Where is Mary?” He’s trying to throw me, but he didn’t reckon with my Windy City credentials. He coughs and then speaks. “She left with another guy named John.”

The one thing I wasn’t expecting. The one man I didn’t suspect.

Time for action. Mary and John can wait, but Jim’s my case and he has questions to answer. I grab Jim by the collar and pull him from behind the desk. He puts up a brief resistance, but he isn’t strong enough to break free. Up against the wall he goes, and I cuff his hands together behind his back. Time to take him downtown.

I’ve long enjoyed the output of Markov chains. They are some relatively simple procedures for generating sequences based on previous values and frequencies. You can apply this to text, and generate new text based on frequencies of letters, or words.

The old resources I used to learn about Markov Chains way back when have somewhat stuck in my head. I recall a reference to ‘Alice in Elsinore’; and that can be found at a page called ‘Fun with Markov Chains‘. There’s another bit which went into the varying lengths, how short lengths — say, one to three characters — produced gibberish that kinda almost looked like it might have been English once; and longer lengths gradually come closer and closer to the original text[s]. That seems to have been part of Programming Pearls, which used to be available to read online; I only managed to find part of that section archived on Jeff Atwood’s blog by use of some judicious Google search tools.

You can create some fun things with Markov chains. The examples given above included a generated Alice in Elsinore and the Revelation of Alice. I implemented Markov chain text generation as a command for an IRC bot that I wrote, which could talk in the ‘voice’ of my friends that hung out on there; that command was definitely my favourite.

Latterly, we’ve seen a resurgence in this with the rise in ‘AI’. Such as this ‘AI-written Harry potter fanfiction’

But calling any of this ‘AI’ is a stretch. It’s picking things based on random chance and frequency. If I have a sock drawer with thirty red socks, six green and two blue I’d be… a bit boring. But if I closed my eyes and picked socks from there, it would be a bit misleading to write an article saying “I got an AI to choose my clothes for the week and these are the results”.

Having brought in Jim, my attention must turn to Mary. Her sister was counting on me. I trusted my Chicago detective instincts and followed up on a lead that Jim spilled during his interrogation.

I went to the park. There I met two men, Mikey and Brenda. Apparently, they didn’t get along. I knew Mikey was hiding something, and decided to find out what it was. I dragged him into an alleyway, shoved my knee into his back, and started punching him.

Mikey pleaded with me for mercy, this was all a misunderstanding, help would be forthcoming, he didn’t want to die, etc. I told him to shut up.

“Where is Jim?” I asked in the same voice I used on Jim earlier… Wait, wait. Wasn’t Jim at the police station? “Oh, that’s right,” Mikey says. “He went home for the day.” I was confused, but went along with it. “Oh, good”. But then Mikey had a surprise for me. He grabbed me, threatened me and apologised. I sensed that Jim was a touchy subject best left alone, so asked about Mary.

“Mary?” Mikey asks. “Who’s Mary?” I explained about the woman’s missing sister. “What about her?” Mikey enquires further. But at that point we spot mart coming out of a store. I approach Mary, and she looks surprised to see me.

Apparently she recognised me. I ask about her sister and Mary explains she’s at work.

At this point I realise something weird is going on. Sounds seem muffled, colours aren’t quite right, and time and place seem strangely elastic.

I thought perhaps AI Dungeon 2 was a bit like Sleep Is Death (Geisterfahrer) by Jason Rohrer, where the stories are written by players; or Cleverbot, where responses given by people are saved and can be reused.

But AI Dungeon 2 instead uses deep learning techniques to keep generating content, no matter what is thrown at it. It does have limitations, but it’s an interesting concept sprung from a Hackathon.

Things were getting weird. I tried to dance with Mary, which seemed like the thing to do at the time. She stared at me, but not in an uncomfortable way. I tried a backflip, and it ended with us falling asleep together1. Then I had to run away, far away; away from the voices shouting that we’re not sisters.

A group of men accosted me. They looked like they had been drinking heavily. I had to keep the initiative; my detective instincts took over and I slapped one of the men. It surprised the group. I slapped another one and it surprised them identically. But they started to beat me, which I guess was inevitable.

I tried everything to distract them. The harmonica, juggling, telling a joke. Fortunately, the last one worked. Unfortunately, at that moment a helicopter landed and I was kidnapped. Mary tried to rescue me, but the jailer was having none of her please for mercy or bribes. Eventually, he tired of the conversation and wandered off into the woods, and Mary went all Bastille day on the prisoners.

The narrative was based on my first interaction with AI Dungeon 2, which can be read in full.