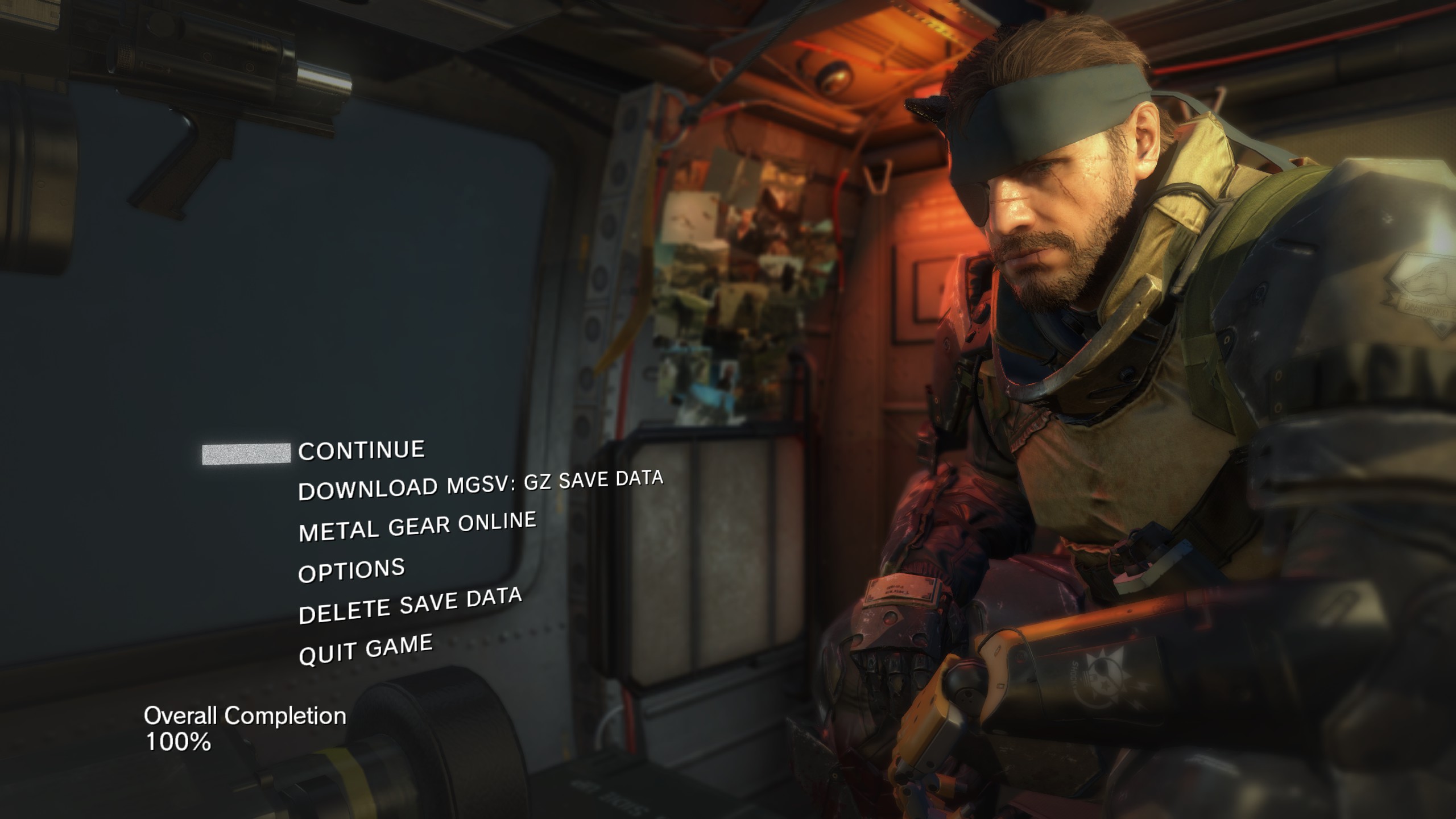 I finally got there! I have mixed feelings, as I no longer have an excuse to load the game up and mess around; but on the other hand I am happy to be done with some of the slog.

Even towards the end, after a hundred hours the game could still surprise me. I’ll give you a quick example: I was attempting a Subsistence mission (where you start with nothing but a pair of trousers and your wits). Some careful sneaking at an outpost netted me an AK and a bit of ammo, and so armed I went for the main objective- a small base that served as a radio relay station. I dispatched their forward patrol non-lethally and made my way through a pass that lead to a ledge directly above the base.

I do like the non-lethal approach, which has been consistently rewarded by other titles in the Metal Gear series. My normal approach would be to methodically and silently tranquilise the various patrols and guards without arousing suspicion; but with my only ranged weapon being unsilenced this wasn’t an option. Could I lure the guards somewhere secluded and incapacitate them? Perhaps! I made a bit of a movement on the ledge and the guard decided he would run the several hundred meters around the hill and through the pass to get to me. A quick bit of CQC and one down! Okay it took a few minutes but the theory was solid. Another guard was similarly lured.

There my plan stalled. No matter what wild, strange dance I did on that ledge, I couldn’t attract anyone’s attention. It being night probably didn’t help. There was nothing to do — aside from firing my gun, but that would have attracted a little too much attention — but drop down into the base proper. I was able to knock out another guard when I got the harsh musical sting and slowmo (which will forever belong to Max Payne in my head) meaning someone else had seen me. What’s more, they were too far away to silence before the brief window that lets you prevent a full-blown alert closed. Whoopsy.

I was determined to roll with the punches. Even if the punches were in the form of many automatic rifle rounds to the not-armoured-trousers.

So, there was a full-blown alert! I ducked behind the small building housing the objective (some radio comms equipment), peeking out to exchange fire. I soaked up a bit of damage — trousers are not as good armour as you might think — and was seriously considering reloading from checkpoint. But by this point in the game I had already achieved the S rank for the mission (which generally depends on either speed or being super-stealthy or both) so I was determined to roll with the punches. Even if the punches were in the form of many automatic rifle rounds to the not-armoured-trousers.

Combat was faring less well than I hoped. The guards were well-armed and well-armoured. Ducking around one end of the building was rewarded with a warning of a missile lock on me (!), and the other had a shotgun/machine gun duo who were surprisingly effective. I was low on health, low on ammo and lacking a weapon that dealt sufficient damage to those who wished to do me harm. Then I was thrown a bone.

A very windy, sandy bone; but a bone nonetheless. Sandstorms limit visibility to about 2 feet, so this was an opportunity to scarper. Which I did, in the direction of a nearby mortar.

In the nigh-on 100 hours of gameplay, I don’t think I’d used a mortar before. They just didn’t mesh terribly well with the whole stealthy-and-non-lethal approach I so heavily favoured. As I could still see marked enemies in the sandstorm, I was able to take out most of the guards that had previously been gunning me with great effect. And some of the guards I hadn’t spotted before and couldn’t see through the sand. And some of the radio transmitters. And the anti-air radar.

After that finishing off the last few non-mortally-wounded (or is that non-mortarily-wounded?) soldiers and completing the objective was a relative breeze.

MGSV:TPP had many of these moments, when things didn’t work out the way they were planned; but the outcome was even better than expected.