Update: fixed! The recently-released FTL by Subset Games has a problem with the 12.8 AMD Catalyst Drivers, whereby the jump map and enemy ships are not rendered See below) due to an issue with edge detection in anti-aliasing. The fix is to create a custom profile for FTLGame.exe in the Catalyst Control Center to over-ride the settings (support thread with instructions, and setting). 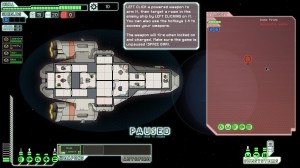 (yes the overlaps the menu, but there’s not much interesting there anyway!)