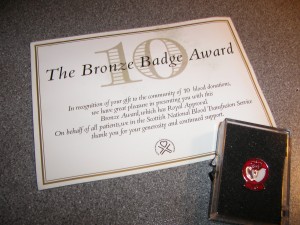 The title of this post conveniently ignores all the other pins I’ve earned, which must be at least…. for certain… that I know of… to be sure… 1 other. If not more. Maybe. Anyway, having earned pins in games such as the Battlefield series, it was interesting to actually get one. What’s more fun is it’s in the same style: “Do X, Y times, get pin”. In this case instead of “revive 8 people in a round” it was “have your blood drained 10 times”. I thought it had been more, but obviously I’ll need to visit the vampires more.

In other semi-interesting news, I bought a laptop. It’s a Dell M1730 and it’s big, beefy, weighs about the same as a 2 year old and draws enough power to dim the lights when I turn it on. In the neighbourhood, that is. Also, while we’re on ridiculous things, the display has the same resolution as my 28-inch monitor and they keyboard has a numpad.

I’d give you a picture of the laptop too, but my camera has electric arthritis and just grinds and whinges in a manner reminiscent of a small child in an antique shop. Still, that at least gives me ANOTHER thing to buy for going away, which is happening this Sunday by the way. Yay! Or rather, I’m going broke like I have a terminal disease.

PS Twitpic doesn’t like it if you link to files from outside of it, which should be obvious except to me.

(If my writing seems out of sorts it’s because in my head it’s the rapid sardonic babble of Ben Croshaw, or Yahtzee of Zero Punctuation to give him his Sunday name)